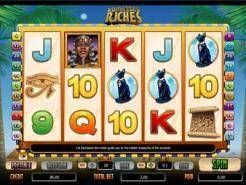 Play Now
He was one of the mighty kings of Egypt, he was revered and he was loved. Ramesses was the son of Pharaoh and became himself a Pharaoh during which time he was able to rule fairly and justly. Players in this game will enjoy the Ancient Egyptian symbols that fill the twenty paylines of this colorful slots game. There is an auto play feature option for players that like to preset the number of spins the game runs for consecutively. Players can choose their coin size based on their own personal budget and they can bet multiple coins per payline.

The Wild and Doubling King Ramesses