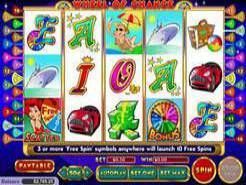 Play Now
Wheel of Chance is an exciting slots game that is based on the original TV game show where players enter a quiz show and if they are lucky enough they win a chance to spin the bonus wheel that offers huge cash prizes. In the base game players will see symbols of wealth spinning around the reels that include sports cars, yachts, fancy holidays, stacks of money and more. Players can try out this game for fun before placing real money bets and this gives them a chance to see all the symbols and learn how to play the game before placing real money bets and getting the Adrenalin going with the excitement of the game. There is an auto play feature for players that want to preset a number of consecutive spins and this can be stopped at any time and reverted to manually hitting the spin button.

Free Spins and Multiplying Wins from the Hostess Scatter

There is an extra bonus game in the Wheel of Chance 5 Reel Slots game that is activated when the bonus symbol appears on reels 2 and 4 at the same time. In this case the player is taken to a new screen with the bonus wheel. The bonus wheel is made up of many different colored sections. Each section refers to an amount. The player spins the wheel and where it comes to rest is what the player wins. He does have a chance to re-spin if he is hoping for a higher win but often he ends up with nothing so it is a real gamble if the player should re-spin or not. Wheel of Chance is colorful and lively and it is great fun to play with so many winning options offered for the player at every stage of the game.
Play Now