Be Swept Away in This Thrilling Game from WGS 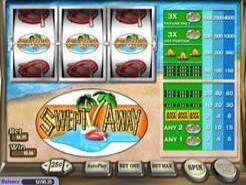 Play Now
Finding new themes for online slot games must be a real challenge, especially when it feels as though every theme has already been used. So hats off to Wager Gaming Technology for coming up with something pretty different, based on being swept away to a desert island. While many of the features in this game will be familiar to you, they’ve kept things different enough to warrant taking a closer look.

Which quantity of reels and paylines combine to form Swept Away?

You only have three reels to contend with in Swept Away, and you’ll have but one payline to wager your coins on as well.

Try a range of coins between 0.01 and 10.00 on this game, and benefit from having the chance to wager one, two or three of them on the line as well. This can open the way towards bigger potential prizes.

Does the Swept Away slot have special symbols in play?

Well, you won’t get the usual bar symbols here, although there is something that looks similar. Instead of bar symbols you’ve got SOS symbols, which is very appropriate given the theme! There is no scatter in this game (it never appears in a three-reeler game). However, you do have the perk of finding a wild, which in this case comes in the form of a Swept Away logo. You can bag a win if you get even one of these on the reels, but you also receive a prize for two of them. Get three on the payline and you can trigger the jackpot. This is worth 4,000 coins for a three-coin bet. You might also scoop a prize for three of the logos appearing in any position. If you look at the game screen, you’ll see that while the payline runs across the middle of the reels, you can see other symbols above and below it. If you get three logos and all three of them appear here, you’d still get a win, which is nice.

Can you trigger a bonus game?

No, there is no bonus level included in this particular slot.

Download and play Swept Away for a thrilling slot experience today!

We actually rather liked playing this game. While there are no special features, the addition of the three logos in any position prize is worth shooting for. How many wins will you get?
Play Now