Tuck Into a Holiday Feast with Wager Gaming! 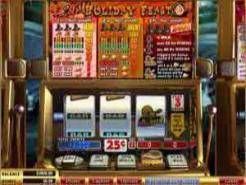 Play Now
Wager Gaming has created some great five-reel games, but they are also known for a wide variety of three-reeler options. Holiday Feast is one of them, and you might already imagine the theme in use here, which just so happens to be on the topic of Thanksgiving. With the design of the game appearing like a classic casino slot, you will feel as though you are in the thick of the action as you place your bets and hope for a successful spin.

Which quantity of reels and paylines combine to form Holiday Feast?

We’ve already given away the number of reels here – three of them – so you might correctly guess there is only one line in play.

Start with a 10-cent bet on the payline, and consider maximizing your bet to $10 per coin if you like. You can try playing up to three coins, and there is a reason why you might want to play with three, as you will shortly find out.

Does the Holiday Feast slot have special symbols in play?

The hat is wild in the game, and if you get one to help form a winning line, it would double the prize. Two of them with another symbol gives you a 4x multiplier on the prize. A three-hat combo is also the jackpot trigger. This is 2,400 coins if you are playing with three coins; however, the win would be 800 or 1,600 coins respectively with one or two coins played.

Can you trigger a bonus game?

Remember when we said it was advisable to play with three coins? This is because in doing so, you have a shot at unlocking the bonus game. Yes, there is a bonus round here and if you get a turkey in the third spot on the payline, you will unlock it when you play three coins. You are presented with nine turkeys in a panel that temporarily replaces the pay table. You get to pick from the turkeys there, and you are awarded with a prize as a result. It’s not a complex game but it is a nice feature to have.

We like this game, even though it works in the same way as some of their other bonus three-reel slots. It works, and it is good fun too.
Play Now